Portrait Artists Australia launched a wonderful exhibition in Australia’s Parliament House on  3rd November  2012.  Entitled “Innovators of  Australia” the show was opened by Dr Christopher Chapman who celebrated the Australian artists represented in the exhibition.

The  opening was covered on the front page of the Canberra Times.

Louise Beck was thrilled to be represented in the show with her painting of Thomas Knox Arnold – innovator in the world of audio/sound technology. 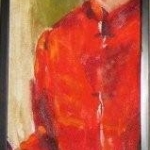